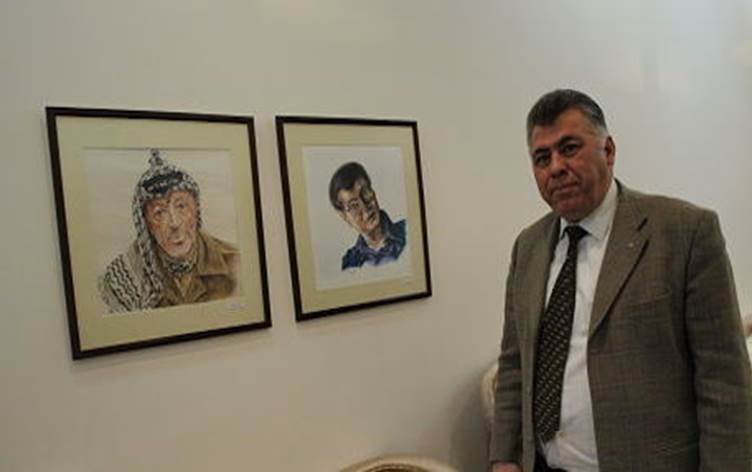 Nazmi Hazouri is the first Consul General of Palestine in Iraqi Kurdistan. Photo by Judit Neurink

Nazmi Hazouri is the first Consul General of Palestine in Iraqi Kurdistan. Although his title is that of an ambassador, his job is not, he says. But it shows the importance the Palestinian leaders give to their presence in Kurdistan, not only because of business opportunities but also because of education. Thirty Palestinians will soon start their studies at Kurdish universities, Hazouri told Rudaw in an interview. Here are his comments:


Rudaw: Why do we need a Palestinian Consulate General in Erbil?


Nazmi Hazouri: To continue the historic relations between the Kurdish and the Palestinian people. Salahuddin Al-Ayubi came from Kurdistan to fight for Jerusalem, and won the battle of Hattin (in 1187). Partly because of him, we have generations of Kurds living in Jerusalem, Gaza and Ramallah, whom we now see as Palestinians. But you can still recognize them from their names. Our great leader Yasser Arafat had good relations with Mallah Mustafa Barzani, and later with Massoud Barzani and Jalal Talabani. What we have in common is that we both are victims of the Sykes Picot Agreement of 1916. It led to Israel occupying Palestine, and to the division of Kurdistan.


Rudaw: How did Kurds end up in Palestine?


Nazmi Hazouri: Partly they came with Salahuddin, but many also came with their families to work, because in the past Palestine did not have borders. And later, in 1948 they came with the Iraqi army to fight for Palestine (when the state of Israel was declared. In Jenin we have a monument for those who fell in 1948, with about 50 Iraqi names, some of Kurds from Sulaimani, Sinjar, Akre and Duhok. We hope to collect the names of all Kurds who fell in Palestine, as we think that is valuable for our relationship. To work on improving it, we meet in a mutual committee since 2009.


Rudaw: What is the influence of the past on the relations between Iraqis and Palestinians? While the Iraqis died of hunger under the embargo, Saddam Hussein used to reward the families of Palestinian martyrs, and for that reason many Iraqis hated the Palestinians.


Nazmi Hazouri: Some Palestinians now live in Baghdad under a bad situation, because of the bad security there - like everybody. Some because they had a relation with Saddam Hussein, yes. But all Arab governments were supporting us. The PLO had asked them to support the Palestinian revolution, and Iraq was just one of them. Palestinians should not pay for that relation, as they were not looking for war, but for their land and its independence.


Tunis is not rich, but paid for Palestine, so did Yemen, Algeria, all Arab governments. We had the support from all Arabs. We had Arab soldiers who paid in blood for Palestine. Yet, at the same time that our leader Yasser Arafat had a relation with Saddam Hussein, he also had one with Mullah Mustafa Barzani. Before 2003 the Baath party supported Palestine, and today the Iraqi government and the Kurdish politicians do.


Rudaw: Under Saddam Hussein some 35,000 Palestinians were living in Iraq, but most fled after his fall. How many Palestinians are left today?

Nazmi Hazouri: In Iraq about six-and-a-half thousand. Kurdistan has about 300 Palestinians, some of whom came from Mosul and Baghdad, others from Europe and the Emirates. But they aren’t refugees. All our people are working here, in medicine, engineering, building, and trade. They have companies, often in partnership with Kurds or Lebanese. Doctors are setting up clinics. We encourage Palestinians to come here; the consulate was set up two years ago and we have organized two business missions since. Our people are successful here and live a good life.


Rudaw:  After the invasion of 2003, a group of Palestinians who fled from Baghdad got stuck for years in a camp at the Jordan border. What eventually happened to them?


Nazmi Hazouri: Up till now, eight families are still living there. Others went to Australia, Brazil, Chile and Syria. The eight families are still waiting. They try to get back to Iraq. Some phoned me that they would like to come to Kurdistan. Some have small shops in the camp which also houses some Iraqis. The UN has registered them and is working on it. We speak to the UN to solve the problem, and ask to treat these people not as refugees, but as individuals.


Rudaw: Because of the suppression by Saddam, anti-Arab feelings still are strong in Kurdistan. What is your experience as an Arab in Kurdistan?


Nazmi Hazouri: Between people, there are no major problems. As Palestinians, we try to look at the individual. Not all Israelis are Zionists, and there are many that we can live with in peace. We all live in this world, and who wants to live in war? That is what Kurds could learn from us, yes.


Rudaw: Not only Palestinian expatriates come, also students. What are they doing in Kurdistan, where they can’t even speak the language?


Nazmi Hazouri: We at the consulate consider education as our first mission, to be able to build the Palestinian society. Therefore, 30 of our students are coming to study in Erbil and Sulaimani. Ten for medicine, dentistry and pharmacy, and 20 for engineering. We have been promised they will be able to study mainly in English, partly in Arabic. They will learn Kurdish as well, as they live in the dormitories with Kurdish students. Eighteen have already started, but five are stuck in Gaza. This is what occupation means. Two students are coming from Syria, and we try to get them here through Beirut. My dream is that they will graduate and go on for their PhDs. And we hope that we can get some scholarships at the American University in Sulaimani or the Kurdistan University of Hawler.


Rudaw: Do Kurds also use the consulate to be able to visit Palestine?

Nazmi Hazouri: Until now, no. Two years ago we invited the football club of Erbil to come and play, but we had problems to get them across the Israeli borders into Palestine. We contacted the UN and the Vatican, because we want to be open for all visitors. Any Muslim or Christian should be able to come to Palestine in peace. All Christians must be able to visit their holy places in Palestine, like the birthplace of the prophet Isa (Christ). But you see, this is what occupation is like.