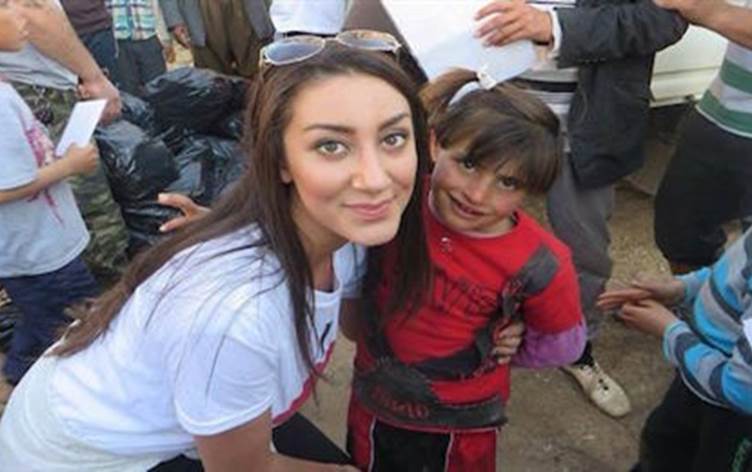 A+ A-
Pictured: Kurdish activist Delal Sindy
Harrowing accounts of the sexual abuse endured by women and girls at the hands of Islamic State fighters are being recorded by a young Swedish-Kurdish activist living in Kurdistan region named Delal Sindy.
Of all the tragic accounts Sindy has encountered, the case of a 17-year-old Kurdish Yezidi girl we’ll call Suzan has drawn the most online interest. A Facebook post about Suzan’s experience has earned over 10,000 shares.
Suzan’s story is more than just a heart-breaking story of cruelty, slavery and sexual abuse. It also underscores the social stigma that follows some of the abused women for the rest of their lives.
Suzan was held captive by an ISIS militant known as Al-Russiyah. He kept several women as sex slaves until he was killed alongside his bodyguards by Peshmerga forces nearby Shingal.
“He lined the three of us up naked every morning. He would then choose who he wanted for the day,” said Suzan, who added that the extremist would smell each of the young women.
After the leader made his pick, the bodyguards would select from the remaining women for themselves.
“They were terrible. They beat me and would come at least two together,” she said.
In fact, Suzan wished to end up with Al-Russiyah because he didn’t hit the women as the others did.
“It was like choosing between death and death,” she said.
Prior to being sold to Al-Russiyah, Suzan was held in a hotel in Mosul called Galaxy. She described a building full of women and girls, all half naked or semi-naked.
“The day me and my 10-year-old sister were sold was the last day I saw my mother. I will never forget when she started crying and pulling her hair when they took us.”
She was later transferred to the ISIS stronghold in Syria, Raqqa, where there she and dozens of other women were examined to determine whether they were virgins.
“The virgins were taken to a room with 30-40 men. They lined us up and pointed who they wanted,” she said.
“I thought I might be lucky, I was not as beautiful as the others”
Soon, however, she was bought by a man from Chechnya who purchased her and two other girls in a matter of 10 minutes.
Suzan gave horrific accounts of daily rapes by the man’s bodyguards.
“They forced me to say things from the Quran during the time they did their actions, and if I didn’t they whipped me.”
On an occasion Suzan resisted, they burned her thigh with boiling water.
“They took us to one of the villages near Shingal. [Al-Russiyah] and his bodyguards were wounded when they fought against Kurdish soldiers. He died immediately and the guards also. That was when we fled.”
Some girls who ran back to ISIS because they were afraid. As Suzan said, “another girl who tried to escaped had her legs cut off.”
Suzan’s resistance led her to safety after three days.
“I do not understand why I escaped. I have nothing left. I wish they had killed me instead.”
Suzan’s father is dead and she has no information about her siblings or mother.
“What do I have to live for? I try to forget everything, but when I close my eyes I see them before me and I want to kill myself.”
In patriarchal societies and ultra-conservative families, some Yezidi girls still face uncertainty. This is a fact despite the highest Yezidi cleric urging families to accept and welcome women who had fled ISIS.
This is the case for Suzan. Her uncle threatened to kill her if he found out of that ISIS sexually abused her and “tainted” her honor.
To make matters even worse, Suzan is currently three-months pregnant.
“I don’t know what to do.”